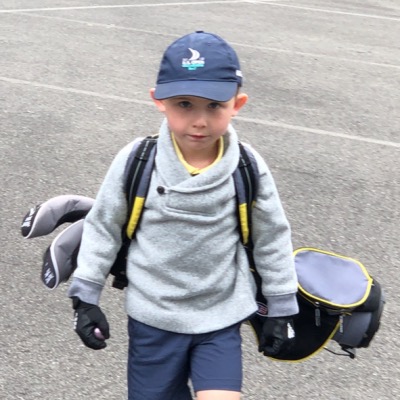 This week, we are happy to announce our next #1inaMillion Golfer Theo Morgan from Tacoma Country and Golf Club in Lakewood, Washington.

5-year-old Theo was nominated by his Operation 36 Coach Tad Davis. He had this to say about Theo: “Theo was very shy and sad going into his 2nd match after missing by 1 shot, and then going out and shooting 36 like nothing happened! He has amazing skills and focus for a 5-year-old!”

Theo is a fifth generation golfer. He has been around the game since before he was walking, crawling around a putting green and stuffing golf balls in the hole. He started putting after his first Christmas when he got his first plastic clubs and hasn’t stopped trying to get better since.

His parents report that he always wants to putt, even if it’s during dinner at the course. His favorite game to play is the game of golf itself! He loves playing “on the big course” as much as he can. Theo’s motivation to play and practice comes from his love of the game.

Theo’s recently been motivated to advance divisions back so that he could be the first person to tee off in his group. In order to pass division 2 in his last match he needed a 2 and a 3 in his final two holes. He then lipped out a hole in one on the 8th hole, made his putt for 2 and then on the 9th hole he made a 12 foot putt for his 3! 36 on the number!

Congratulations Theo! WOW!! We see great things ahead for Theo!